No F1 at Indy in 2008; Bernie & Tony Can't Agree But Leave Door Open For Future
Here's the formal word from the Indianapolis Motor Speedway:
INDIANAPOLIS, Thursday, July 12, 2007 – The United States Grand Prix at the Indianapolis Motor Speedway will not be on the 2008 Formula One schedule after eight consecutive annual events since 2000.
After recent meetings, Indianapolis Motor Speedway CEO Tony George and Formula One Management Ltd. CEO Bernie Ecclestone mutually agreed to not schedule Formula One racing in 2008 at Indianapolis.
“After several discussions, Bernie Ecclestone and I were unable to agree how to keep Formula One in Indianapolis for the near term,” George said. “However, we have agreed to leave the door open for a potential future date.
“It has been a pleasure having the United States Grand Prix at Indianapolis, and I hope that as we approach our Centennial Era at the Indianapolis Motor Speedway, an opportunity might present itself that would allow its return.”
The 2007 event was June 17 and was won by British rookie Lewis Hamilton. At the time, George and Ecclestone agreed to a mid-July deadline for a decision about future events.
So F1 fans will have to dust off the passports and go to Montreal to see their stars. Pity. The race didn't have the inaugural crowds of the 2000 event in the last few years...but some 125-thousand fans in the facility is as large a crowd, if not the largest, that that series draws. However, what passes for promotion with Formula One Management is nowhere near what is needed to promote a major racing event in the United States. Like it or not, the good old USA is still a very desirable market for auto makers (Mercedes, Ferrari, Toyota, Honda, BMW) and there is (even with the push to stifle) more technology involved with one of the Toro Rosso cars than any ten Nextel Cup teams combined. The fans who like F1 like different stuff than do the NASCAR and IRL fans. Indianapolis Motor Speedway management gets the picture on promotion, but their hands are tied by FOM. Ecclestone has said that F1 does not need a round in America. Does Phoenix in 1990 ring a bell? Ultimately, is it worth a short term gain, if the long term prospects to rebuild the Formula One brand are diminished by diverting money for promotion to high rights fees (a practice for which Mr. Ecclestone is noted)? And the talk of the City of Indianapolis ponying up some of the dollars Bernie wants is bogus, especially with that city needing to keep their cops on the street.
Posted by Paul Kaminski at 3:10 PM Links to this post 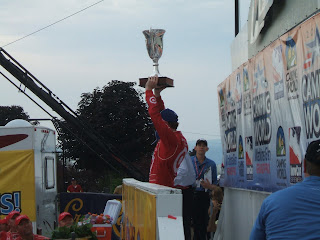 Scott Dixon was quick and patient today. On Lap 19 of the IndyCar series race here at Watkins Glen, he saw his chances for victory increase dramatically, when polesitter and then leader Helio Castroneves whacked the wall in turn 11. Dixon was on the wheel, swerved and put himself in position to win, when he took the lead for good after the final round of pit stops. He won by 6.25 seconds over Sam Hornish, Jr (whom we will talk about later). Third was series point leader Dario Franchitti, fourth was Tony Kanaan and fifth was Marco Andretti.

This was the result of an incident when Hornish and Kanaan touched wheels on Lap 29 of the 60 lap race. The incident seemed to bother Kanaan, who bumped Hornish's car and knocked the toe link on the cool down lap, going to pit road. Once they exited their cars, a discussion that Hornish characterized as "a little bit louder with my voice than I needed to be" and some physical contact ensued between Hornish, Kanaan and Hornish's father. A group of officials broke up the brouhaha, which was captured by TV, and is likely on YouTube. This will make for an interesting driver's meeting at Nashville, which is the IndyCar Series' next venue, which will be the 4th of five straight weekends. Do you think drivers get short tempers? Of course. Is it possible that the five straight week stretch might be broken up in 2008?

Pointleader Franchitti will like Nashville, since it's a "home game" for him (he and wife Ashley Judd make their home near there).

Weekends off are good for everyone, IMHO.

The next "live" blog for us is at the Indianapolis Motor Speedway. We'll comment on any other news that may occur in between.
Posted by Paul Kaminski at 7:47 PM Links to this post 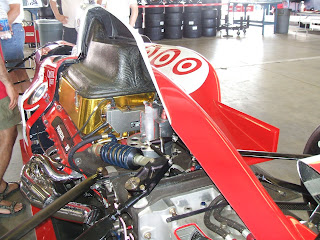 Inside a typical IndyCar Series chassis

We found a cutaway car in the Watkins Glen garages. This is made to look like the #9 Target Dallara-Honda driven by Scott Dixon. The picture on the left shows how all the running gear is shoehorned in underneath the bodywork. On the right, the bodywork in place.

The aforementioned Dixon was the fastest in morning practice, 133.554 miles an hour...about 2 1/2 miles an hour slower than Helio Castroneves' pole winning lap on Saturday. The polesitter had the fifth fastest warm up lap.

The weather is warming up here on the hill. Despite the breezes that blow through the Glen, the temperatures can get unbearably hot. Race cars, and their drivers, like temperatures in the 70's to low 80's.

We were able to catch the last bits of the Pepsi 400 on TV...and Jamie McMurray break a Nextel Cup (soon to be Sprint Cup) victory drought with a big, close, exciting restrictor plate derby finish at Daytona. The TNT "wide open" format is an awful lot like the ESPN-ABC "side by side"...not an Emmy winning development by any stretch. The first and middle parts of the race put me to sleep...I wonder how many other viewers fell off to sleep.

Posted by Paul Kaminski at 11:05 AM Links to this post

I've been coming here for some 30 years (with the exception of Desert Shield/Storm and when the track was closed in bankruptcy)...and have seen IMSA Prototypes, Nextel Cup cars, Trans-Am cars, Champ Cars, Super Vees with two young guns named Unser and Andretti--Al Jr. and Michael, endurance racing and Formula One Grands Prix over the short and long courses here. Today and tomorrow, we're here for the 3rd IndyCar series race at this historic facility. The last two were won by Scott Dixon...and he has to be considered a favorite here. In practice, Helio Castroneves was fastest...but they don't pay points or prize money for practice.
We'll post a few snapshots throughout the weekend...
Updated at 5:40 Saturday
Helio Castroneves is the polemeister of the IndyCar series...his fifth pole in ten attempts came after a hot lap of 136.021 miles an hour in "Fast Six" qualifying...the IRL's version of F1
"knockout" where all the slow cars fall out and let the fast cars go for the pole. Castroneves says the Glen's 3.377 mile layout (the full course...not the dumbed down Nextel short course) gives the six lots of opportunities for clean laps. Scott Dixon starts 2nd...he and a gull made contact...the gull got the worst of it. Pointleader Dario Franchitti rolls 3rd...followed by teammate Tony Kanaan.
Sprint Cup and "sprint cars"?
The company formerly known as Sprint/Nextel dropped a shoe at Daytona that everyone expected...the name of the NASCAR series they sponsor will now be known as the Sprint Cup starting in 2008. So I suppose that the full fendered "winged wonders" will now be known as "Sprint cars"? Maybe that Car of Tomorrow wing can grow as large as the ones on the back of World Of Outlaws cars.
Enough. See you tomorrow.
Posted by Paul Kaminski at 10:41 AM Links to this post