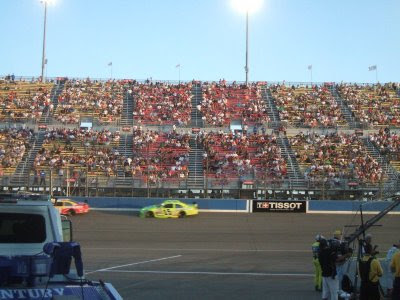 "Any Wonder Why They Wanted an October Race?"
There are thousands of people here at Auto Club Speedway. There could be a LOT more-hence the date change for the 2009 fall race here. You might not notice the empty seats on the HD ESPN broadcast--that is why I took this snapshot.
Jimmie Johnson, the polesitter and driver who's led the most laps so far, officially clinched his spot in NASCAR's Chase for the Championship on lap 101.
We'll join you with our usual race winner snapshot and summation after the post race news conference.
Posted by Paul Kaminski at 9:58 PM No comments: Links to this post

"JJ on Pole; AJ 2nd"
Front row at Auto Club Speedway consists of first time Cali pole sitter Jimmie Johnson--with his 4th pole of 2008...under slick conditions the two time and defending Sprint Cup champion put down a lap of 180.397 miles an hour. AJ Allmendinger put his Red Bull car on the front row...he of the go-or-go home ranks. AJ's lap was clocked at 179.659. Johnson car-owner and Hendrick Racing teammate Jeff Gordon was 3rd--179.565. The Dodge Boys have positions 4-6 (Kasey Kahne, Patrick Carpentier and Elliott Sadler). The best Ford belonged to Jamie McMurray, who'll start 13th--178.006.
The Kyle Busch/Carl Edwards incident still on the minds of the beat media...the super secret NASCAR double probation on their minds as they seemed contrite when asked about the Bristol cool-down.
We have some business to transact Saturday. We'll rejoin you on Sunday (race-day).
Posted by Paul Kaminski at 8:54 PM No comments: Links to this post

Grant v NASCAR Update
Heard from the attorneys for NASCAR (Greg Riolo) that the pre-trial conference I referenced in past posts and on my show is slated to be held on October 3 in Federal District Court in Manhattan.
We'll snoop around Auto Club Speedway in Fontana on Friday and Sunday for more.
Posted by Paul Kaminski at 10:16 AM No comments: Links to this post 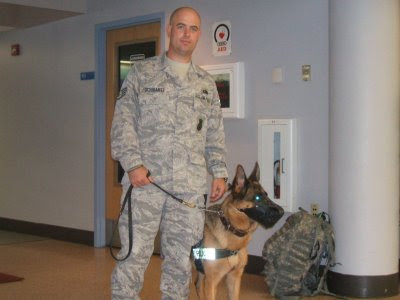 NOTE: We were delayed by work getting to the West Coast, so we'll resume our race blogging with the NASCAR race at Auto Club Speedway in Fontana, CA next weekend.

It is not everyday that one gets to encounter a true hero--and we're not talking about a race car driver or a pop culture icon. No, we ran into "Wizum", who is a member of the US Air Force Security Forces. Staff Sergeant Michael Schwartz is "Wizum's" handler, and told me the story about this four legged veteran.

He's an IED hunter. Yes, that nose that you see hidden behind the muzzle sniffed out threats to not just the SF airmen, but soldiers from the 4th ID, 25th ID and 10th Mountain Division. "Wizum" gets a little jumpy when there are kids running around, hence the muzzle. If our hero could talk, he could probably swap some war stories that would very likely make the hair on the back of your neck stand up.

One nice thing for our four legged hero: Since he (like Jack Webb) carries a badge, "Wizum" does not have to ride in a crate when he flies, and adds another level of security. I'd think the air crews would be happy to have him along for the ride.

I hope, when he is ready to retire, that ol "Wizum" will find a place where he can run free and lay out in the sun for the rest of his days. He's earned it, IMO.
Posted by Paul Kaminski at 7:21 AM No comments: Links to this post

"Lawyers, (guns) and Money"
The late Warren Zevon's anthem played through my head over the weekend, as I tried to digest a half hour of chat with Benedict Morelli, head of Morelli and Ratner, PC, who represents Mauricia Grant. Morelli made interesting points during our interview.

We'll rejoin you with more blogging from the West Coast at the IndyCar series race at Sonoma, CA.

UPDATE: We also finished a podcast for CBS News, Radio which you may see on the network affiliates' web sites. In it, I excerpt parts of the interview, and I give a timeline of events. You may wish to check the websites of your local CBS News, Radio affiliate (the ones who carry CBS News on the Hour).

Posted by Paul Kaminski at 6:05 PM No comments: Links to this post

"Grant v NASCAR--The Answer"
I have a copy of the sanctioning body's answer to the allegations of Mauricia Grant, which was filed today 8/8/2008 in the US Federal Court for the Southern District of NY, which is in Manhattan. Here's the short take:
The sanctioning body denies all of Ms. Grant's allegations. The answer suggests that NASCAR's counsel will want to file for a change of venue, if the case is tried. The answer also asks Judge Batts to dismiss the case in its entirety and have the Plaintiff reimburse the Defendant (NASCAR) for its legal fees.
We're still trying to get an interview with Ms Grant, or absent that, one of her attorneys. To be fair, we're also asking for input from NASCAR's attorneys. We think Ms Grant won't be available for a while, thanks to the revelations about her past driving record and encounters with the LA County (California) Justice system mentioned in the AP stories which appeared on August 7th. Interesting how coincidences occur.
Posted by Paul Kaminski at 7:36 PM 1 comment: Links to this post

"The Carl, Bob and Jack Show"--Roush wins at Pocono

Is it better to be lucky than good? You might properly direct that question at "Cousin Carl" Edwards and long-time crew chief Bob Osborne. Osborne called his driver into the pits for a tire stop which put him out of the lead (at the time). Osborne and Edwards had a disagreement on the strategy (or lack thereof). After a 41 minute rain delay, Mr. Osborne's strategy reminded one of another denizen of "Happy Valley"--JoPa. Edwards was in the right place at the right time afterward, and had enough to win over a charging Tony Stewart, who would have won the race if it were 10 laps longer. Brickyard 400 winner Jimmie Johnson was 3rd. I would not have wanted to be on Kyle Busch's plane this evening--the Sprint Cup point leader lost a lot of his lead because his car ran out of gas two laps from the end...as he was running fourth. So the post race show was entertaining with Jack Roush just sitting back like the "Cat in the Hat".
The points going into Watkins Glen:
Kyle Busch--3059
Dale Earnhardt, Jr.--2883 (-176)
Carl Edwards--2874 (-185)
Jimmie Johnson--2859 (200)
Jeff Burton--2833 (226)
6-12
Jeff Gordon
Kasey Kahne
Greg Biffle
Tony Stewart
Denny Hamlin
Kevin Harvick
Clint Bowyer 2512
Matt Kenseth is 13th at 2501 points.
We'll resume live blogging from the IndyCar event at Infineon Raceway outside Sonoma, California.
Posted by Paul Kaminski at 9:49 PM No comments: Links to this post 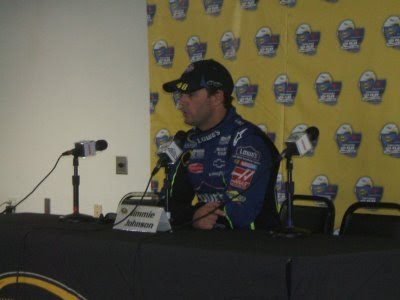 JJ "Has Somethin' For 'em at the Tricky Trioval"
This result happened last weekend at Indianapolis...so for the second time in a week...Jimmie Johnson and Mark Martin will start first and second for this weekend's Pennsylvania 500 at Pocono Raceway--a/k/a the "Tricky Trioval". Maybe the race at Chicagoland Speedway (where Johnson was beaten by point leader Kyle Busch) served as a defining moment--where crewchief Chad Knaus and JJ said "enough". The Knaus crew had to replace some balky shifter mechanisms before Johnson went to qualify...Mark Martin was fast at 167.560 miles an hour. Johnson put his Lowe's Chevy Impala SS on the pole with a lap of 168.215 miles an hour. Johnson's key to this race is tire management--during qualifying, drivers want to beat the snot out of the tires, because this 2 1/2 mile trioval is very abrasive. During the race, drivers want to conserve tires, because the track is so abrasive. Kasey Kahne will start the race 7th in his Budmobile (Dodge Charger). The point leader, Kyle Busch, struggled in practice, and didn't find a lot more speed in qualifying, so he'll start 27th out of 43 cars.
ARCA Note: Scott Speed is making the transition to full fendered cars with style...he's on the pole for Saturday's ARCA race. I wonder what might have happened had he been allowed to get a couple of years testing for the main Red Bull team in F1--and then try his hand. Dieter Mateschitz is a good judge of talent, IMO.
Posted by Paul Kaminski at 6:37 PM No comments: Links to this post