The Phoenix Champ Car Finale is no longer--the promoters (who likely spent most of their warchest on the streets of Vegas--not the tables :-) ) said it wouldn't be viable without sponsorship. It got Sheriff Joe Arpaio's imprimatur--but even that wasn't enough. So our southwest fans will have to be content with the NASCAR Nextel Cup pentultimate round at Phoenix International Raceway. I'm also suspecting a little schadenfreud might be circulating at the PIR offices. The Champ Car series absolutely MUST have some more American rounds for 2008, and not front loaded in the spring.

Indy Racing League officials will speak at the Belle Isle Race course on Saturday...is is possible the entire '08 schedule will be revealed?

And the only vehicles circling the Track Too Tough To Tame in South Carolina belong to construction crews--fans are still sore about California Speedway taking the Labor Day traditional race weekend...but, in NASCAR-speak, it is what it is.
Posted by Paul Kaminski at 4:20 PM Links to this post

The contretemps between Richard Childress Racing and NASCAR (proxies for at&t v Sprint) is tedious, but not boring. Commercially, at&t is the largest cell phone provider...Sprint does not come close. What is at stake here is NASCAR's ability to sell exclusive series sponsor rights (and the accommodations that go with that sponsorship) vs. at&t's right to change its name. The company did not change its name simply so it could go on Jeff Burton's #31 Chevy. AT&T is an iconic brand, which makes us older folks turn our heads like Nipper, the RCA dog. When Bell South bought AT&T, they bought the most valuable brand name in telecommunications. Does Bell South have the right to change the brand name of its cell service from Cingular to at&t? Of course. We suspect Sprint is driving this more than pragmatism. Why? They aren't beating at&t in numbers of subscribers (can you spell iPhone...)so they want to exact some "justice" by having NASCAR be their proxy.
Good Beach Book for NASCAR Fans
Jim McLaurin and David Poole, two veteran NASCAR scribes, have collaborated on a book which is a "Cliff Note" history of what makes NASCAR, NASCAR. NASCAR ESSENTIAL from Triumph Books is an easy read, and one the casual fan should pick up. The book (unlike the culture surrounding NASCAR today) remembers and looks into the beginning of the sport (1947--not 2004, when Nextel took over sponsorship), with intriguing looks at the knights and knaves who wrote and lived the history.
Back to Basics--road trips will resume
When you wear many of the hats in any enterprise, you tend to get caught up in short term crises, which build into long term problems, unless you take some time, get back to basics, and refocus your efforts. That's one of the reasons we had to cut back on travel this summer. Usually, our "Race-Talk" program will have intriguing comments from drivers in all series. That comes from attending races, and talking in person with the drivers. With $3/gallon for fuel...that is a bit difficult. So we've added advertising positions in both our programs, to insure that our fans and the others with whom we deal, can be dealt with properly. This effort will take some time to bear fruit (or grow like potatoes--most of it underground, out of sight, until you are ready to dig). Once it does...we will be in better position to bring back to you, our listeners and readers, the proper perspective of a 30 year observer.
Posted by Paul Kaminski at 10:40 AM Links to this post 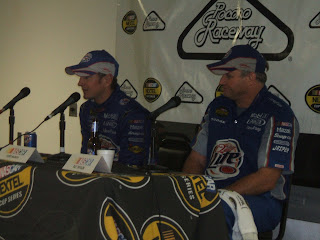 The Captain (Roger Penske) had the best day of all at Pocono...Kurt Busch gained points on Dale Earnhardt Jr by leading 175 of 200 laps at Pocono for his first race win since March 2006, and second win on the tricky 2.5 mile tri-oval. Busch beat his rival for the "transfer slot" for the Chase for the Championship, Dale Earnhardt, Jr.It was also the first Penske Racing win for new crew chief Pat Tryson. Busch (left) and Tryson (right) talked for a half hour after their Victory Lane duties were completed.

His IndyCar series drivers weren't so fortunate at Michigan--Tony Kanaan nipped Marco Andretti by .05 of a second to win the last IRL race at the 2 mile Michigan oval. Sam Hornish was credited with 9th place but wasn't running at the end. Last year's winner, Helio Castroneves, touched wheels with Vitor Meira and both crashed out on lap 58.

Busch tells us they get inspiration from having Tim Cindric (Penske Racing President) across the hall from their garage at Mooresville...and the fact that Penske Racing is one of the world's most successful road race operations is not lost on either Busch or Tryson. That said, both are on the way to Road Atlanta to test their Car of Tomorrow piece, which will run next weekend at Watkins Glen.

Though we're keeping a low profile...we'll keep our ear to the ground.

Posted by Paul Kaminski at 8:38 PM Links to this post

The polesitter, Dale Earnhardt, Jr spun a few moments ago...thought he had a flat, but spun and brought out a caution...a problem for Jr, none for the leader Kurt Busch. Jeff Gordon was running second when the flag flew.

Any semblance of co-operation and congenality between Formula One teammates Lewis Hamilton and Fernando Alonso went out the window, when Hamilton inherited the pole after ignoring team strategy...Alonso won the pole, or so he thought--the FIA took it, and manufacturer's points away, so Hamilton started the Hungarian Grand Prix from the pole. Hamilton won, and pads his lead to 7 points...as the series takes a three week break.

The swan song at Michigan turned soggy...rain delayed the start of the final IndyCar race there (for the forseeable future)...so the battle continues between Dario Franchitti, and Scott Dixon.
Posted by Paul Kaminski at 4:35 PM Links to this post

We are back live blogging at Pocono Raceway, where the talk centers on hi-jinks between Robby Gordon and Marcos Ambrose at Montreal in the Busch Series debut, where it seems the only thing that wasn't hit was the 649 (Loto-Quebec). Gordon, according to reports, did not acquit himself well in the late stages of the race, spinning out Mr. Ambrose to take what he perceived to be the lead in the race. Happy Harvick (Kevin, Daytona 500 winner), took the win, followed by hometown guy Patrick Carpentier. Garage area wags suspect that Robby Gordon will taste multiple lashes of NASCAR justice, perhaps a sanction or two concerning the Nextel Cup effort.
Here at the spinach patch...we await the race. Dale Earnhardt Jr. starts on pole...his post qualifying chat was most entertaining...covering everything from fans who might need a change of anti-perspirant...calling crew chief Tony Eury, Jr. at 2am to ask whether the car was going to be fast...motivating that team when things go wrong...and saying that much of Junior nation is realizing that the move to Hendrick will indeed take place. Kurt Busch starts second...brother Kyle third.
We'll snapshot the winner...and sniff around the pits and garages...see you later on.
Update at 9:55 am local
Robby Gordon was parked for this race...because of what happened in Montreal. P. J. Jones will start the car from the tail of the field. There will be other penalties, which are usually announced early next week. NASCAR officials describe Robby Gordon's actions as over the top. This is but the first of many lashes.
Update at 3:15 pm
Robby Gordon is still on the property...according to NASCAR, he was parked as a driver, but was allowed to participate as the car owner (which explains the appearance on ESPN's pre-game coverage). The 2-12 duo of Penske drivers Kurt Busch and Ryan Newman have dominated most of the first quarter of the race...polesitter Dale Earnhardt runs 5th.
Posted by Paul Kaminski at 8:22 AM Links to this post